Priorclave North America is proud to work with a diverse array of customers spanning many fields and applications.

We’re eager to match these organizations with an autoclave that meets their needs:  Rugged and reliable, outfitted with a precise, accurate, and flexible control systems. And we’re pleased to offer them outstanding satisfaction and support throughout their autoclaves lifetime. In 2015 Blue Belt Technologies was working on a new robotics-assisted suite of tools to improve partial and total knee replacement surgery.  The system relied on several reusable components that must be sterilized after each procedure. These included an electrical sensor encased in a metal and plastic enclosure assembled with epoxy.  Blue Belt had a variety of concerns about how this device would hold up to repeated uses and sterilization. They wanted to run it through hundreds of sterilization cycles, but off-site services were expensive, and conventional autoclaves needed to be manually operated. Under these conditions, even a single testing cycle took months.  With our help, Blue Belt increased prototype testing throughput by 500%, doing months of testing in mere days. Learn how Blue Belt and Priorclave did twice the work in half the time. In 2015 the University of California, Riverside (UCR) moved forward with construction of a new facility for their Department of Environmental Health and Safety. This facility sterilizes large waste loads, but only does so once or twice per week. Unfortunately, they had committed to buying a large medical-style sterilizer. This unit required 24/7 cooling water feeds and a perpetually hot “on-demand” steam generator.  Despite running cycles infrequently, it was going to strain their utility budget.

Purchasing a similarly sized Priorclave saved UCR a significant sum–even taking into account the 20% “cancellation penalty” the original manufacturer forced them to pay. More importantly, switching to a properly specified research-grade autoclave resulted in ongoing savings: more than a 57% reduction in energy use and 87% reduction in water consumption.

Keeping Pilgrim’s Pride Up and Running

In early 2015 Priorclave outfitted Pilgrim’s Pride with a benchtop autoclave for one of their facilities in Pittsburg, Texas. Pilgrim’s Pride is the largest chicken supplier in the US, with meat quality testing at the cornerstone of their business. Their quality assurance department had previously relied on a medical-grade tabletop sterilizer. They struggled to keep this unit up and running under the relatively heavy workload posed by their daily waste processing and media prep cycles.

By replacing this sterilizer with a research-grade Priorclave 60L Benchtop autoclave, Pilgrim’s Pride substantially improved uptime, even as they increased the size of their work loads.

Advancing Innovation at the Cancer Research Center of Columbia, Missouri 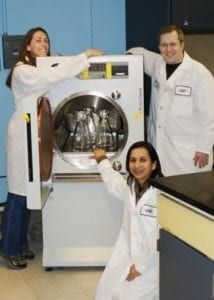 The Cancer Research Center (CRC) of Columbia, Missouri is internationally recognized for their novel approach to targeting and destroying prostate tumors using genetically-altered strains of bacteria. In 2013, with their research progressing toward clinical trials, the CRC needed to add another autoclave to their facility.

As a privately funded research endeavor, it all came down to cost: The CRC needed a large autoclave, but didn’t have a large budget. Priorclave was able to outfit them with a research-specific 150L steam sterilizer for a fraction of the cost of a similar medical-grade unit. Not only was such a research-grade autoclave better suited to their daily media prep and waste disposal needs, but the ongoing savings when it came to utilities, maintenance, and operating costs meant more funds available for their most important work: The research itself.

End-Users Solve their Own Problems In 2015 one of our clients–ALS Environmental Winnipeg, in Manitoba, Canada–decided to reorganize their lab. This required moving their large Priorclave 320L front-loading autoclave. Had they continued using a traditional large medical-grade autoclave, such a move would have been highly disruptive (owing to the weight and size of the machine), and possibly disastrous: With a large number of moving parts and complex plumbing and monitoring systems, medical-grade steam sterilizes that have been in service for several years often never work properly again after being moved.

Because ALS Environmental had opted for a rugged research-grade autoclave–which is wheel-mounted, relies on few moving parts, is plumbed with flexible hoses, and has a lower overall weight due to its cylindrical chamber and low part count–the lab staff successfully completed the move themselves, by simply unplugging the unit and rolling it to its new location. No hassles for facilities. In 2015 Priorclave North America helped a general contractor outfit the new research wing of the Shriners Hospitals for Children in St. Louis, MO. The client had requested a large research autoclave, but the contractor was stuck with a tight budget.

Because the tenant had not signed a lease yet, the GC had no good way to determine what the facility really needed. Priorclave was able to furnish a flexible frontloading 150-liter autoclave that could meet a broad range of research goals. More importantly, Priorclave was able to commit to staff training and ongoing service for the unit, regardless of when the tenant moved in.

In 2013 Priorclave was contacted by an architect working with Central Michigan University on the first independent research facility associated with CMU’s medical school. The lab planner needed to include two independently controlled 150L autoclaves in a limited space. None of the major manufacturers had been able to help her find a solution. Priorclave–always eager to tackle a custom-tailored challenge–was able to furnish CMU with a “double-stacked” autoclave: Two 150L front-loading research grade autoclaves with the footprint of a single unit.

We understand that you have an overfull plate, too little time, and need to fill gaps in your CPD. Priorclave is happy to provide “Lunch & Learn” educational programs that work with your schedule.